UPDATE 2018:
The technique was successfully tested in the SonR (SEDS based Anomaly detection system) as described in the following post:


"My talk, "Catching Anomaly and Normality in Cloud by Neural Net and Entropy Calculation", has been selected for #CMGimpact 2019

The  idea is to calculate imbalance of a system by using an entropy property which well know in the physics , economics and in the information theory.

In my other past posting I rose the following question:
"can the information theory (entropy analysis) could be applied to performance exception detection?"

Looks like the idea from  the mentioning CMG paper of using entropy calculation against system performance data could lead to the answer of that my question!

Here is the quote from the paper:


"...Theil index is based on entropy - it describes the excess entropy in a system. For a data set xi,
i=1..n the Theil index is given by:

Examining closer the IC formula above we can derive several properties:

We also define, for convenience, Normalized Imbalance Coefficient (nIC) as

to account for both imbalance within the set and the maximum entropy in that set. The nIC value ranges from 0 to 1 thus enabling comparison of imbalance between data sets with differing number of elements..."

Author applied that to the multiple disks utilization analysis, but he mentioned that approach could be used for measuring other computer subsystems imbalance. So I decided to try to calculate the imbalance of CPU utilization during the day (24 hours) and a week (168 hours) because the  imbalance of capacity usage during a day or week is a pretty common concern. Also using my way to group base-line vs. actual data I have applied that twice to compare an "average" weekly/daily utilization vs. last week/days of actual utilization.

The raw data is the same as for the last Control Charting exercise I published here in the  series of posts ( see EV-Control Chart as an example), where the actual data (in black) vs. historical averages (in green) are shown below: 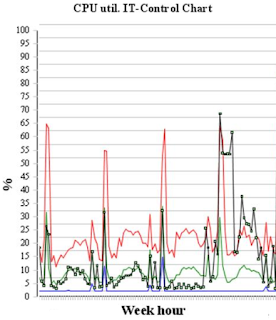 Here is the result of calculating the actual vs. averaged nIC Imbalance difference for all 168 hours and for each weekdays (7 days by 24 hours):

FYI: Here is the spreadsheet snapshot with actual calculation I used: 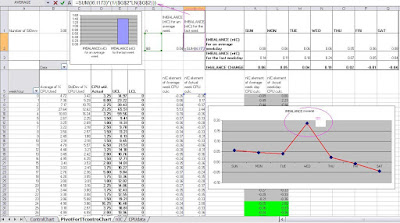 How better that method of imbalance change checking to compare with more traditional ways to do that (e.g. based on deviations) is hard to say. My personal preference is still EV-concept. Anyway someone needs to try that against more data...

BTW I have found another paper which relates to that topic:

In that paper here is the clear statement about imbalance: "A typical imbalance metric based on the resource utilization of physical servers is the standard deviation of the CPU utilization".

Still an entropy is interesting system property that should give us additional good source of information for pattern recognition, I believe. For instance, the balance of Capacity usage of large frames with a lot of LPARS (AIX p7s or VMware hosts)  could be monitored by using that nIC metric to apply some possibly an automatic way to rebalanced capacity usage by using partition mobility or v-motion technologies.
Posted by Igor Trubin at 4:27 PM