I have just received 2-day training of Fluke VPM tool.   I have already mentioned in my other posting:
"Baselining and dynamic thresholds features in Fluke and Tivoli tools" Below are my additional comments about the tool.

All in all I was impressed by the way they implemented basic SEDS principals to filter application performance metrics. I have suggested to do that in my following CMG paper in 2006  in finally that was done!  "SYSTEM MANAGEMENT BY EXCEPTION, PART 6" (can be found in the posting:
CMG'06: Performance Data Statistical Exceptions Analysis (Review)

Also that my paper suggested to use heat chart (tree-map) against network metric too: 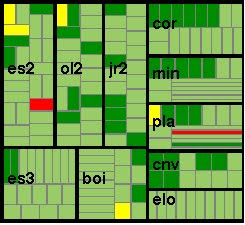 "...For Network devices, the bandwidth utilization can be tree-mapped. Figure shows an example of a Network tree-map. Color coding in this report could be based on exceeding constant thresholds or statistical control limits (SEDS based). Each small box represent a device (size could be indicative of relative capacity, e.g. 1 GB or 100 MB network) and a big outline box could represent a particular application or site (e.g. building)..."