Continuing playing with the open-source tools to build some SEDS elements, I have developed the simple R-script to plot the IT-Control chart against data stored in MySQL database.


I used the same MySQL data that was already been built and used for IT-Control Charting by BIRT reporting system. See the following post about how that was done: Building IT-Control Chart by BIRT against Data from the MySQL Database. To do that I have used RODBC package to connect and query data from MySQL database through the MySQL ODBC driver.

Actually, I have just slightly modified the R-script which I wrote for my "Power of Control Chart" workshop That script could be found in the following post: IT-Chart: The Best Way to Visualize IT Systems Performance
Here is my new script (click on it to enlarge) :

Here is the result: 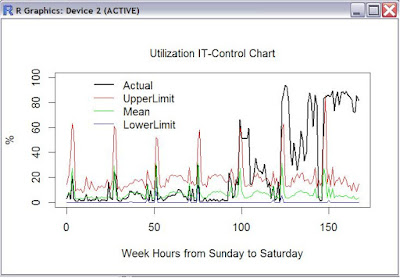 which practically identical with what was done by BIRT (see link to BIRT based  picture here).

If you are a programmer you would notice how it is easier to build charts using R versus BIRT (not-for-programmer, menu-based report generator).

The data used for this exercise was already preprocessed to the DATA-cubical format from raw date-hour stamped data (see the SQL script for that here). But what about doing this pre-processing also by R?

That is the next task ... (could be your homework ;). The simplest approach is again to use RODBC package just to run the mentioned above SQL script within R-system. Other and better approach is to do that using the natural R-system data manipulation technique.